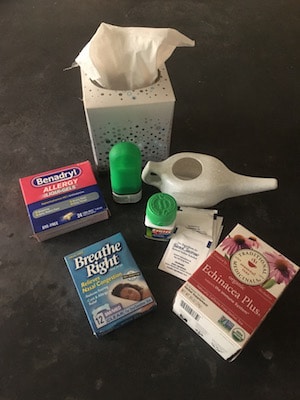 Welcome, Austin visitor! Have your eyes started to itch? Are you sneezing? Can’t go anywhere without a tissue? Does it feel like you’re coming down with a scratchy throat and bad cold?

You’re not sick (though you may want to die). “We have first-time guests actually ask, ‘What makes Austin smell so good? Why does it have such a unique scent?’” said Chereen Fisher, Top Trip Rentals founder and owner. “It’s a mix of things, I think: our unique limestone-y soil and then everything that’s in the air.”

Depending on the time of year, that “something in the air” could be any number of things. According to Allergy and Asthma Center of Austin, ATX is often listed among the top 5 American cities for allergens.

With more than 300 days of sunshine annually, Austinites love their outdoor lifestyle. Whether exercising or lounging,  spending time outside means getting a handle on any allergy issues.

Knowing what’s blowing in the wind in any given month provides some helpful information for avoiding sneezes, sniffles, and snot.

Here’s a handy breakdown of seasonal pollen and particles you’ll likely breathe in on an Austin visit.

Ragweed (10–30 percent of the U.S. population reacts to ragweed, known as ‘hay fever’; ragweed can grow as tall as 2 ft., though we’ve seen 5 ft. plants in particularly wet years; one plant can create billions of grains of pollen per season; often found along Barton Creek greenbelt)

Weeds/Grasses (central Texas’s weed season, from August–November, is one of the longest in the country; includes Johnsongrass, one of the top 10 worst weeds in the world, and carelessweed aka pigweed–pigs love to eat it; watch out for contact rashes when on single-track trails)

Weeds/Grasses (yup, still hanging around; because winter is relatively mild with few hard freezes, Austin has a long growing season)

Oak (February to late May, Austin’s gorgeous spreading oaks carpet cars and patios with a greenish dust and dropped clusters, called catkins; just forget about washing your car for a while)

Weeds/Grasses (in addition to the pollens, watch out for poison ivy along Austin’s trails; “leaves of three, let it be”)

Mesquite (Texas ranchers don’t like this native thorny tree, which is really a legume; bees like the flowers; Austin’s wild monk parrots eat the beans)

Privet (aka ligustrum; City of Austin has identified ligustrum as an invasive species; sadly popular in older landscapes)

Saharan Dust (north Africa sends Texas gusts of fine dirt; on the up side, the Saharan dust makes summer sunsets truly gorgeous, as light filters through the particles)

Pet Dander (year ’round; Austin loves its dogs, so odds are good that you’re sharing that patio restaurant with Fido, not to mention just about every other public place)

Mold spores (year ’round in central Texas; even when Austin is in drought conditions, check the mold count)